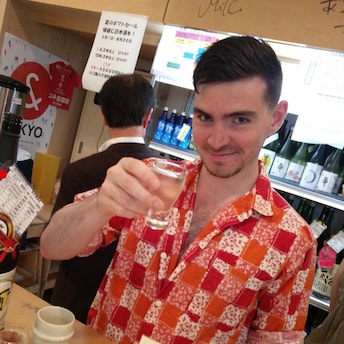 All About David McElhinney
I'm a Northern Irish English Teacher and freelance writer living in Tokyo. I love reading, exercising, playing video games and travelling around Japan when I get the chance. I spend much of my time eating Japanese food and wrestling with my dodgy Japanese language skills.

What I like about Japan
The food, the shochu, the sake and aimlessly wandering the sprawling alleyways of Tokyo.

Japan's Three-Star Road is home to a host of Michelin-recognized sites and wonders, comprising a compact area that covers four prefectures. With the new Three-Star Ticket option, exploring this stretch of Japan is easier than ever before.

The Izu Peninsula in Shizuoka Prefecture offers some of the best and most interesting activites to be found in rural Japan. Better yet, it's just over an hour from Tokyo by train, making it perfect for a day trip from the capital!

All About Japanese Booze

Japan is a country that has a pretty open attitude when it comes to imbibing! Whether you're hoping to slake your thirst on some sake or wind down with an award-winning whisky, Japan has bountiful booze options from which to choose!

Ritsurin is a 400-year-old daimyo garden in Kagawa Prefecture's capital city, Takamsatsu. It is a stunning landscape of idyllic ponds, wooden bridges and expansive greenery.

All About's Guide to Fukuoka

Fukuoka is the largest city on the island of Kyushu. It's a hotspot of tourism, food, culture history on more! Check out our full in-depth guide to one the nation's most overlooked cities.

All About's Guide to Naha

Naha is the capital city of Japan's subtropical prefecture, Okinawa. It's a thriving coastal city that fuses Japan's Ryukyu culture with American and Chinese influences, and has an unbeatable relaxed vibe..

10 Great Things to Do in Saga Prefecture

For many visitors to Japan, Kyushu is an overlooked destination. Which is unfortunate, because Saga Prefecture offers uncharted waters to explore, with its inspired history, bountiful natural resources and unique cultural activities.

Universal Studio's Japan revealed its newest attractions, all of which are inspired by icons from the world of Japanese pop-culture. We got an exclusive sneak peek just ahead of the official unveiling on Friday, January 18!

Tokyo's bizarre museums are an amalgamation of two of our favorite things about Japan—the quirky culture and the awesome organization! Here are five places to check out if you're looking for an offbeat activity around Tokyo!

Where to Enjoy International Theater in Tokyo

Tokyo is chock-full of places were you can get your theatrical fix, even if you don't speak Japanese. With live performances, broadcasts, translated theater, non-verbal shows and improv groups, the options go on and on! Here's what you need to know...

Minakami is picturesque onsen town lying on Gunma's northern border to Niigata Prefecture. It's a nature lover's paradise, bursting with natural hot springs and other outlets for an assortment of seasonal outdoor activities!

Japanese sake is the nation's favorite drink. As the chill of winter sets in, the temperature of the sake rises, which is the perfect way to stay warm!

Whether you're in need of souvenirs, pop-culture-themed presents or traditional Japanese gifts, look no further than Tokyo Station's Ichibangai shopping complex. It also contains some of the best food in the city, from Japanese cuisine and beyond!

Tokyo's winter illuminations are some of the highlights of the calendar year. People flock from far and wide to catch a glimpse of these dazzling visual displays! Here are 5 of our favorites!

Yoyogi Park is one of the largest and most popular of Tokyo's green spaces, and is a hotspot for events that celebrate culture from Japan and around the globe. Here's a quick guide on the various cross-cultural celebrations in Yoyogi over a year.

Tokyo's historic Jimbocho neighborhood is a melting pot of creative pursuits. With bookstores, libraries, art galleries, music shops and theaters, it's a must-visit destination for the artistically inclined!

Japan has many old ghost stories that are still being told today. With Halloween on the horizon we thought it would be appropriate to share some of the best of these spooky tales handed down throughout the ages!

Now that Tsukiji has closed its doors and the operation has moved to Toyosu, we decided to check out how the new market in Tokyo Bay was shaping up. And we weren't disappointed!

The Formula One Grand Prix at Suzuka Circuit is one of Japan's biggest and best annual sporting events. But the fun goes way beyond the race itself, offering up an entertaining mix of attractions and activities for the whole family to enjoy!

All About's Guide to Sapporo

Sapporo is Hokkaido Prefecture's vibrant and eclectic capital city. Its varied climate and laid back-vibe make it one of the nation's most interesting tourist destinations in any season!

The best of Chiba, Saitama, Kanagawa & the big city itself!

From the Mountain to the Sea

The Secrets of the Lawson Copy Machine